Not so long ago, in a city nearby, I was driving to a landscaping store. The address had been given to me by my friend and she explained in great detail the exits to take and how easily it could be found. Let me add that finding places has always been a gift of mine. I often brag about how I have an inner GPS. I know North by Northwest and I know what the JCT sign means. To top it off, I can pretty much give you an exact ETA when I go just about anywhere. But this was different. After driving for about an hour, (a destination that should have only taken about 30 minutes to find) I threw out the directional life line, a call of help to another friend. Now, I know you are thinking: Why doesn’t she just GPS it?
Well, guess what? I already had, I just could not understand what my new phone GPS was telling me. The map just did not make sense and was unreadable to me at the time. (Please note – iPhone enthusiasts, it was not an iPhone). So continuing on my journey, I was now making the same freeway loop for about, ohh, the 6th time. In other words, I felt caught in a maze, as if some dense fog was surrounding the actual location that I needed to get to. I knew it was there somewhere, but it was concealed from me. Like the Twilight Zone episode of people passing a town, they turn around to go back, but the town has disappeared. Enter the planet Neptune. Astrologers often overlook this planet, most likely because it is considered to be one of those generational planets. Neptune is not visible to the naked eye just as the other outer planets, Pluto and Uranus. They stay in a sign for a long time moving very slow. Neptune was discovered in September of 1846. Some of the Wikipedia details on Neptune’s discovery are even …. Neptunian. Meaning that before the actual discovery in 1846 are suggestions that it was pre-discovered by Galileo in 1613. It is said Galileo mistook Neptune for a fixed star when it appeared to be very close to Jupiter. Maybe he was thinking, “am I really seeing that or is that Jupiter?” Neptune creates illusions. Like fog, we can see the outline of something, wait, we are not really sure. We simply cannot make it out. Neptune was discovered when movies and photography were being birthed. It is connected with film, art, music, dancing, intoxication, psychic power, addictions, fantasies. When Neptune is on or very near your ascendant, you may not be able to see yourself or others in a clear manner. It causes confusion and deception. If Neptune is transiting your 7th house of relationships, you may have found the most romantic partner of your dreams. A perfect fantasy. Ahh, but wait, what you see, with Neptune is not necessarily what you get. Give Neptune a chance to move a little, lift that fog and things will begin to become clearer. Here are some other interesting facts and events about the year Neptune was discovered that I felt to be rather Neptunian. The final conclusion is of course, yours to make.
*Benjamin Palmer patents an artificial leg
*Dr. William T. Morton uses Ether to anesthetize a patient for tooth extraction
* Elias Howe patents the sewing machine
Now back to my unfound destination. My life line phone call said “pull over and stop your car”. Now, there was a new approach, that thought had just not entered my head, my Mars nature had just kept pushing through the fog. I immediately pulled over. My life line phone call was able to help me figure out where I was and from there gave me step by step directions. Of course, I found my landscaping store which turned out to be its own kind of Neptune. 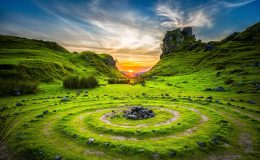